This past Thursday marked the beginning of the 'Impact Wrestling' era. I have to say that the last couple of weeks of Impact have been really good, and I dare say better than RAW/Smackdown (although this past Smackdown last week was the best Smackdown I've seen in years). Impact has begun to groom Robert Roode to be a real player in the company. He cut a classic promo on Hogan a couple of weeks ago, and this Impact he had a very solid confrontation with mentor Ric Flair... but that's for another post. This post goes to Mr.Anderson for providing (other than Chyna's return) the moment of the year in Impact Wrestling. This really made Anderson look clever and the fact that he pulled it off so well was even better. I truly believe that Impact is going in the right direction at the moment. This is a reason why. Hats off to Anderson.
Posted by Video Toy Box at 8:56 PM 1 comment:


Well... it's official... Sangriento sucks. TNA's (I'm sorry... Impact Wrestling) attempt to answer WWE's Sin Cara has been an epic fail. Sangriento's costume looks so low budget. So does Suicide for that matter. Sangriento's costume looks like something some elementary school kids put together. On top of that, you can clearly see the seam on the top of the mask (which makes it look so cheap). Look at Rey Mysterio and Sin Cara's outfits... heck... just their masks. Look at any luchadores from Mexico. There are no visible seams on the top of the head. It just looks really cheaply made. It looks like someone who doesn't know the first thing about lucha libre outfits was asked to go outside their comfort zone. Then on top of that, you have Amazing Red playing the role of Sangriento. You guys look pretty silly trying to pass off an American high flyer as a Mexican style high flyer. His moves don't even look lucha libre lol. Amazing Red is one of the best in the world... but don't make a complete joke out of him. Message to Impact Wrestling... if you're going to have an answer to WWE on something... at least make it worthy. You want to be the Kickboxer to their Bloodsport, or the Mortal Kombat to their Street Fighter. Instead you've become the Krull to their Star Wars. A weak wannabe imitation.
Posted by Video Toy Box at 8:54 PM 1 comment: 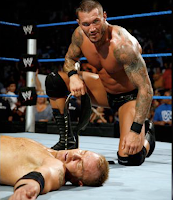 In the aftermath of Christians shocking title loss just days after he won it, the majority of wrestling fans were outraged. Randy Orton, Jim Ross, and Joey Styles received angry e-mail/tweets from tons of fans who were angry at WWE for having Christian drop the belt almost as soon as he got it. There are a few fans who tried to defend the WWE's actions by claiming "it's part of a bigger storyline" (That idea being derived by a tweet by Chris Jericho). No offense, but I find that to be a pretty bogus excuse. A weak cop out to justify a senseless decision by WWE. There are several reasons why that excuse doesn't hold water.

1) The excuse was made by someone who is not even employed by the WWE right now, so how would he know? Jericho was just offering a possible alternative explanation, not a fact. Some of the WWE marks just took it and ran with it.

2) Every single thing that happens on wrestling is part of a bigger storyline so that excuse really makes no sense. You could use that to justify just about anything. It's no different than saying David Arquette winning the WCW World Title was just "part of a bigger storyline". Everything is part of a storyline, and a storyline is always bigger than one single action. So that excuse is nothing more than a cheap cop out.

3) History. Was Kanes 24 hour title reign in 1999 part of a bigger storyline for Kane? NO. Kane didn't win another World Title for a decade.

4) My theory is that Christian was just holding the belt until Randy Orton got there. Originally, Edge was set to face Alberto Del Rio for the title at Extreme Rules. Edge's abrupt injury forced retirement threw a huge wrench in WWE's plans. So, they had to find someone else to fill Edge's spot to fight for the vacant title. That means someone new would've been champion no matter what. I knew Christian was going to win the belt because with Cena and Miz staying on RAW heading into the RAW World Title Match, and Del Rio getting drafted to RAW... the only Smackdown guy left after the draft in either World Title Match was Christian. So it was obvious he was going to win, plus it doesn't hurt that Christian winning the title is a fitting end to the Edge retirement story for him to have his best friend take his place. The thing is, it takes a month to build to a pay-per-view. Randy Orton was drafted to Smackdown 6 days before Extreme Rules. You can't build to Smackdown's ppv main event in 6 days. So, Christian beat Del Rio for the belt and then the first Smackdown after the PPV Randy Orton beats Christian for the title. Hence, Christian was just holding the belt for Randy Orton.

Posted by Video Toy Box at 5:16 AM No comments:

Dream Match of the Week: Sting vs Kurt Angle

This Dream Match comes from TNA once again as the "Franchise" Sting battles the "Olympic Gold Medalist" Kurt Angle for the World Heavyweight Title in Atlanta, Georgia at Bound For Glory. This is a match that no one ever thought would ever happen. WCW's Sting vs WWE's Kurt Angle. This is what sets TNA apart from the WWE. TNA delivers matches that we never thought we would ever see.
Posted by Video Toy Box at 10:31 PM No comments:

Right when you are about to say "Wow, WWE finally got something right"... they prove once again that they have no idea what the fans want. They finally put the World Title on Christian and in less than a week... he loses the title on Smackdown to Randy Orton. I have to ask... what does putting the World Title on Randy Orton for the 8th time do for the WWE? They don't gain anything from it. We've been there and done that 7 times before. Then they totally kill Christians buzz. This was one of those decisions that just leave you scratching your head and wondering "What were they thinking?". Christian winning the title was new. It was fresh and a different direction. WWE's biggest problem is that they can't get past Cena and Orton, and it's hurting the product as a whole. We've seen Cena and Orton win the title a combined what... 18 times now? Enough already. We're sick and tired of Cena and Orton as champion. It's an old hat. This is a perfect example of why TNA marks can't stand WWE. This is why TNA fans turned off WWE. Bone headed decisions like this. How many more stars have to suffer just so Vince McMahon can make a squeeze a couple more bucks out of Cena and Orton? Christian deserves so much better than this...
Posted by Video Toy Box at 11:25 PM No comments:

One thing that truly sets TNA apart from WWE is that we often see matches that we never thought we would see in a million years. In this case, Sting vs Matt Hardy! A year ago, no one would've ever believed that Sting would battle Matt Hardy. Now, thanks to TNA... it was made possible. This is one thing that really makes TNA different from WWE.
Posted by Video Toy Box at 9:17 PM 1 comment:

Christian Finally Wins the Big One!

1st off, I want to say I love my wife! Now, on to business. At WWE Extreme Rules, Christian finally won the big one.Anyone who reads this blog regularly knows that I've made it very clear that WWE was dropping the ball on Christian by not making him champion. While I'm ecstatic for Christian because he is the most deserving superstar in pro wrestling, I can't help but feel like WWE only did it because Edge was forced to retire. Had Edge not been forced out of the spotlight, WWE wouldn't have even considered Christian for the title. Since WWE no longer had Edge, they settled for "Diet Edge". With Edge being forced into retirement, it only made sense to have his best friend take his spot. It's very similar to Rey Mysterio winning the title after Eddie Guerrero's death... seemingly divine intervention opening the door for Rey as it has for Christian now. It's the "Angels in the Outfield" of professional wrestling for Christian. If anything I believe that TNA should be praised and commended for showing Vince and the WWE that Christian could be a credible World Champion. TNA saw a World Champion in Christian FIVE YEARS AGO! (Christian won the World Championship in TNA in 2006, see below for footage of his TNA title win) Christian was feuding with Kurt Angle, Sting, and Jeff Jarrett 5 years ago and more than holding his own. TNA should also be credited with really raising Christians stock in the wrestling world. Congratulations to Captain Charisma. You deserve the title, and it is so long overdue. This ones for the peeps!
Posted by Video Toy Box at 9:01 PM No comments: