The following is a list of theme songs used in conjunction with Wrestlemania 29, and includes the 2013 WWE Hall of Fame Theme Song as well.

Click on the links below to listen to theme songs

Posted by Video Toy Box at 6:17 PM No comments:

Posted by Video Toy Box at 6:11 PM No comments:

Show kicks off with Austin Aries cutting a promo. Aries says Bully Ray told him he would never be champ again. Aries says he's going to prove him wrong, and Aries calls out Jeff Hardy for a match.

Backstage Segment with Sting giving a pre-Lockdown speech to his teammates James Storm, Magnus, Samoa Joe, and Eric Young: Sting promos are always great. This was just a run of the mill Sting promo.

Backstage Interview with Matt Morgan: Matt Morgan says he told Hogan he was going to tear through the entire roster and that he's just getting started. I can't help but feel like TNA is not going anywhere with Matt Morgan. Matt Morgan world title pushes have historically ended up being nothing but a tease in TNA. He's had probably 3 world title pushes that I can remember and it never goes anywhere. Eventually he washes back into the mid-card every time. Hopefully he doesn't this time because he has World Champion written all over him. He could be a big star in WWE if TNA doesn't start doing something with him.

Wes Brisco comes out and cuts a promo: Wes cuts a mediocre promo about how Kurt Angle isn't that great. Kurt Angle comes out and ends up in a brawl with Wes Brisco. D'Lo Brown, Bruce Pritchard, and Al Snow come out to break up the fight. D'Lo Brown suddenly low blows Kurt Angle and reveals himself as the V.P. of Aces and Eights: I can't help it but Wes Brisco looks like a member of Raven's flock more than he does an Aces and Eights member. As for D'Lo Brown being the V.P. of Aces and Eights... I'm left wondering... why? What is the pay off to having guys like D'Lo Brown and Taz in Aces and Eights??? They don't wrestle anymore and their stock is very low with the fans right now because they've both been off the radar for about a decade now. Aces and Eights feels more and more like a bunch of nobodies and c-list wrestlers. The only A-list wrestler in the group is Mr.Anderson and he's been relegated to crony status. Mr.Anderson has been misused for awhile now.

D'Lo Brown cuts a cheesy promo backstage about why he joined Aces and Eights and then orders Devon to go fight Sting: TNA at this point has lost me with the Aces and Eights storyline. This faction to me has grown to become nothing but a dud. It's just a bunch of C-List wrestlers and nobodies. I feel bad that Mr.Anderson has to be even associated with this faction. D'Lo Brown's explanation for joining Aces and Eights really didn't make any sense. He claims he was told that the Aces and Eights would always be there for him. Ummm... ok. This faction has officially gone from super interesting to a joke. Why have a "Road Agent" and a "Commentator" in your faction???? What's the end game? It's just dumb and mind numbingly illogical. I don't even think TNA knows where they are going with this story. D'Lo Brown's promo just came off very cheesy and his acting was completely over-the-top.

Devon vs Sting: Devon defeats Sting after a "fan" throws a drink in Stings face. I feel like this fan was a plant because he was wearing what appeared to be an Aces and Eights beanie and he looked out of place wearing a red long sleeved flannel. All of a sudden the fan is swarmed by security as Devon picks up the win. Plant or not, the drink getting thrown in Sting's face was funny but it's lame to see Sting get pinned by Devon. That's like Undertaker getting pinned by Billy Gunn... it just shouldn't happen.

Gail Kim and Velvet Sky argue backstage: Who knew Gail Kim was undefeated at Lockdown? Gail Kim in TNA is apples and oranges from Gail Kim in WWE. Gail Kim's WWE runs are an insult to her talent. Gail Kim is a huge star who never got over in WWE because she wasn't a blonde haired barbie doll like Kelly Kelly, Stacy Keibler, Torrie Wilson, or Trish Stratus. Gail Kim is an amazing talent who can cut promos and wrestle her butt off but you'd never know it if you saw her WWE career.

Hernandez, Chavo, and Velvet Sky vs Kaz, Christopher Daniels, and Gail Kim: This is a random match. Gail Kim gets the win.

AJ Styles Update: Cameras catch up to AJ Styles in Georgia. AJ Styles slams camera man against a car and tells him to leave. This to me feels like a rehash of 2006 when Jeff Jarrett had Alex Shelley follow Sting and his family after Sting said he had retired.

Samoa Joe/Magnus vs Aces and Eights (D.O.C./Garett Bischoff): Magnus and Joe win in a match that I just couldn't bring myself to really care about. I also hope that Magnus becomes a huge star. That guy has the look and he can talk.

Robbie E cuts a backstage promo on Rob Terry: I didn't care about the promo. meh.

Bully Ray w/Brooke Hogan and Jeff Hardy come face-to-face before Lockdown: Bully Ray says the word on the street is that this PPV main event will be the biggest of all-time. Bully Ray tells Jeff he's proud of him for battling back from his personal demons to become world champion. Hardy says he's proud of Bully too for everything he's done. Bully Ray says the only way he can be proud of himself is if he beats Jeff Hardy. Hulk Hogan's music hits and Hogan comes out on crutches. Hogan talks about the talent in the back but says Hardy and Bully Ray are the best of the best. Hogan says everyone wants to find out who the next leader of TNA is, and may the best man win. Bully Ray/Jeff Hardy shake hands. Aces and Eights hit the ring and attack Bully Ray/Hardy. Team TNA makes the save as Impact goes off the air. Greatest main event of all-time? Sorry Bully. The match should be a great match and even give us nostalgia for the old TLC days between the Dudleys and Hardy's, but this match will never be a G.O.A.T. caliber match because classic matches are all about match-ups. Hardy/Bully's styles don't mesh up well enough for a G.O.A.T. caliber match, but they do match-up well for an awesome match if they let tables and weapons come into play.

Conclusion: This episode of Impact Wrestling was extremely lackluster for a go home show heading into Lockdown. The episode wasn't bad, but there was nothing about it that was great other than Austin Aries and Jeff Hardy opening the show. RAW was vastly superior to Impact this week. In a funny side note, just when I thought we wouldn't see Hogan on Impact he shows up on crutches and adds absolutely nothing to the show. It honestly just felt like Hogan came out to make sure he got paid for making an appearance because all he did was babble about wanting to know who the next leader of TNA is. Isn't that kind of an insult to Jeff Hardy? I mean, hasn't Jeff been the world champion now for the last 5 months? How is he not the leader of TNA? I just thought it was funny. 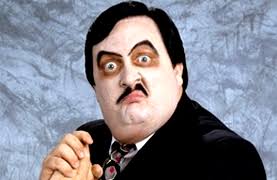 WWE has announced that Undertaker and Kane's long-time on and off again manager Paul Bearer has passed away at age 58.

Our condolences go out to William 'Paul Bearer' Moody's family, friends, and fans.
Posted by Video Toy Box at 9:32 AM No comments:

Then and Now: Sting 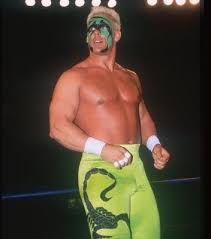 A very youthful Sting in WCW circa 1992?

Sting in TNA Wrestling circa 2012